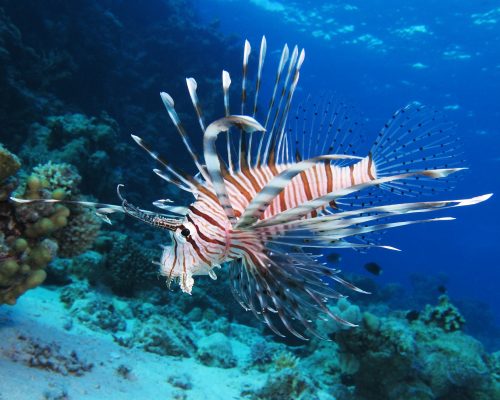 It would be pretty great to be able to use camouflage to protect ourselves and get out of some sticky situations, wouldn’t it?

Although camouflage is often featured in movies, books, and television shows, like the Indominus Rex in Jurassic World and the Invisible Woman in Fantastic Four, there’s also a fair few animals in the world that share this awesome characteristic too.

You’re probably already familiar with the chameleon, who are pretty well-known around the world for their distinct ability to blend into their surroundings, but they’re not the only examples. In fact, Arctic foxes are also able to change their colour depending on varying environments, moulting their fur to blend in better with their terrain.

Camouflage in the animal kingdom is truly impressive, and it’s amazing to think that creatures big and small have adapted over millions of years to become so stealthy. And it’s more than just a neat trick; they use these built-in cloaks and cover ups as an ingenious way to survive!

But it’s not just reptiles and mammals that are able to use camouflage; there are many different species of fish that can disguise themselves for their own benefit. Here are 8 of our favourite fish that use camouflage to survive in the ocean, some of which you can even see right here at Blue Reef Aquarium Tynemouth! Have a look below to see which incredible examples have made our list.

As awesome as their name is, you might be forgiven for thinking this species of fish can also make a bit of a racket – but they’re actually great at sneaking up on unsuspecting prey.

Trumpetfish are able to swim vertically in a swaying rhythm, blending in amongst stalks of sea rods to make themselves appear like a floating stick or a swaying branch. Small fishes and shrimp, the trumpetfish’s favourite food, are then caught off-guard when they swoop down and suck them up.

They also use a tactic called “shadow stalking”, closely following other species, like hogfishes and lobsters, but staying just out of their view – leading the trumpetfish to further prey before anyone else can strike. Sneaky, eh?

Not only is the reef stonefish (also known as the rockfish) one of the most venomous fish in the world, it’s also a cunning master of disguise.

Found in the shallow waters of the Indo-Pacific region, stonefish live on reef bottoms, disguising themselves as rocks or corals, allowing them to remain undetected by prey, predators and even human scuba divers! In fact, their disguise is so accurate, some reef stonefish have even been shown to have algae growing on them. Here, they sit perfectly still, patiently lying in wait for hours at a time until unsuspecting shrimps and other small fish pass by for food.

Using their large pectoral fins, the stonefish is also able to bury itself into sand – another handy way of camouflaging itself. You can see the stonefish ‘in action’ here at Blue Reef Aquarium Tynemouth.

The painted frogfish shares the same superpower as the chameleon, allowing it to adapt to its surroundings by changing colour based on its environment.

Found on rocky and coral reefs in the Indo-Pacific region, the painted frogfish can grow up to 30cm long, but it’s well-equipped so that others have trouble seeing it. Sometimes covering itself in algae, their disguises are so accurate that its prey sometimes approach thinking that painted frogfish are food, before becoming a meal themselves. And with the ability to strike in less than 6 milliseconds and a large mouth so it can eat prey the same size as itself, it certainly spells trouble for any small fish and crustaceans that pass by.

The extensible body of a frogfish is usually covered in spots, stripes, blotches, and filaments. This allows the species to imitate its surroundings and become hidden from predators too. Top fact: the frogfish is named due to the fact its skin and legs resemble a frog, despite still being a species of fish.

The lionfish, just like the reef stonefish, is another incredibly venomous species of fish, whereby its sting can cause severe pain and possibly even death on rare occasions.

The common species of lionfish has a transparent dorsal fin that is also covered with dark spots – allowing it to blend into its surroundings, such as coral and gorgonian sea fans. The fish’s striped patterning also means that, when viewed from far enough away, it can break up its outline, appearing less like a fish to any potential predators.

There are currently 12 known species of lionfish, all ranging in different colours and patterns. You can see and learn more about the common fish at our aquarium.

Named after its leaf-like protrusions and often called the king of camouflage, the leafy sea dragon is another marine species that is excellent at fooling other species, adapting to the point where it’s nearly impossible to see. They belong to the same family as seahorses and pipefish, two more species who are also great at disguising themselves.

Because of the sea dragon’s almost-transparent fins and the fact it looks more like an aquatic plant, they appear more like floating seaweed, an illusion it can maintain even when moving. It can also change colour in order to blend in, though this depends on its diet, age, location and stress level.

Sea dragons, unlike seahorses, are unable to curl their tails onto weeds or seagrasses to stay safe. This can often result in many sea dragons being washed ashore during storms.

The tasselled anglerfish is a classic example of a species perfectly attuned to its primary function: eating. These odd-looking creatures of the deep are easily mistaken for coral thanks to their orange colouring and plant-like protrusions – which combine to make the anglerfish a true master of disguise.

The anglerfish has another trick up its sleeve when fooling prey, too. Its dorsal spine is tipped with a rodlike protrusion, which, thanks to the bacteria it contains, glows to lure prey in. And, once its unfortunate victims are suitably perplexed, it dispatches them with its massive mouth, which is capable of swallowing fish, molluscs and crustaceans whole.

All octopus species are very good at camouflaging themselves from predators and prey, but the mimic octopus is so adept at disguise, it’s almost cheating. These shape-shifting creatures not only change colour to blend with their surroundings, but are known to actively ‘mimic’ other creatures – impersonating other species as a means of defence and offence.

From lionfish to sole, sea snakes to stonefish, biologists have recorded the mimic octopus impersonating lots of species to avoid detection. These animals, like all other octopus species, are highly intelligent, which may explain why they’ve evolved to imitate other creatures.

The cuttlefish may not receive as much attention as its cephalopod counterparts, which include squid and octopuses, but these remarkable creatures have some of the most unique methods of disguise in the animal kingdom. In fact, their camouflage abilities are so good, the US military has studied the animal in efforts to bolster its own methods of camouflage!

Remarkably, a cuttlefish’s skin holds over 10 million colour cells, which work in harmony to allow the fish to blend seamlessly with its surroundings. This remarkable colour change ability happens almost instantly, with biologists remarking that the cuttlefish is the HD TV of the seas.

Come and Meet Some of the Masters of Disguise!

At Tynemouth Aquarium, we have a whole host of amazing creatures of the deep. Pay us a visit and see if you can spot some of our camouflaged masters of disguise!

We’ve got plenty more creatures too – say hello to our seals, otters, and much more. Don’t forget that by booking your tickets in advance online, you’ll be making some big savings on our ticket prices!