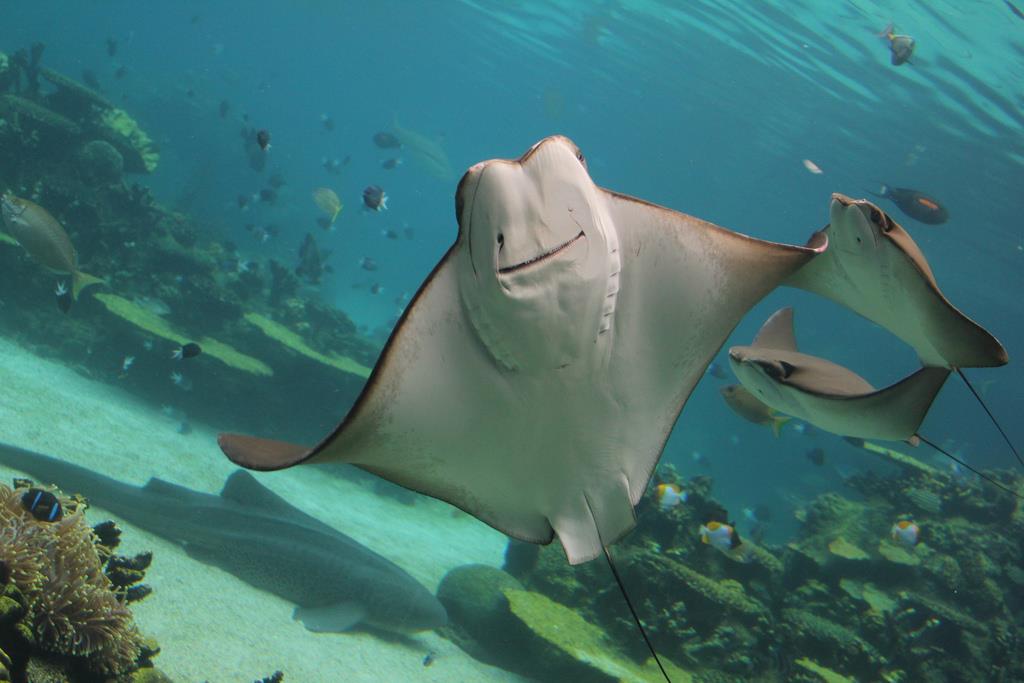 Cownose Rays are native to the Atlantic Ocean but can exists in waters of varying temperatures and salinities. They tend to spend most of their time in shallow coastal waters which can sometimes become brackish. The coastal waters help protect them from predators as very few larger animals are able to manoeuvre in these shallow areas. They are known to migrate huge distances which is safely done by travelling in large schools however we still don’t know why they migrate these distances. They are very active swimmers and will constantly be seen gliding around the Aztec Reef.

Similar to Eagle Rays the Cownose Ray has long pointed fins which look similar to wings. These fins run into all the way up to the top of their body where they create two distinct lobes that separate at their head. This has been observed to look like a cow’s nose which is where the name originates from. The colour of these rays can vary from brown to an olive green colour but all of them have cream undersides. They have a long tail that is equipped with venomous barbs to help warn off predators however this is seen as of little risk to humans as these rays are often featured in diving pools around the world.

As they exist in coastal waters there is a huge variety of shellfish and crustaceans for them to eat. When they find their prey on the ocean bed they use their fins to aggravate the sand and suck through their mouth expelling any sand out their gills. They have powerful jaws that help crush shells to allow them to the animals within. This diet for shellfish near the coast has caused them to be classed by many as invasive and many fisheries have tried to cull their populations to protect their local shellfish stock. This has left them threatened in the wild with risk of becoming extinct.