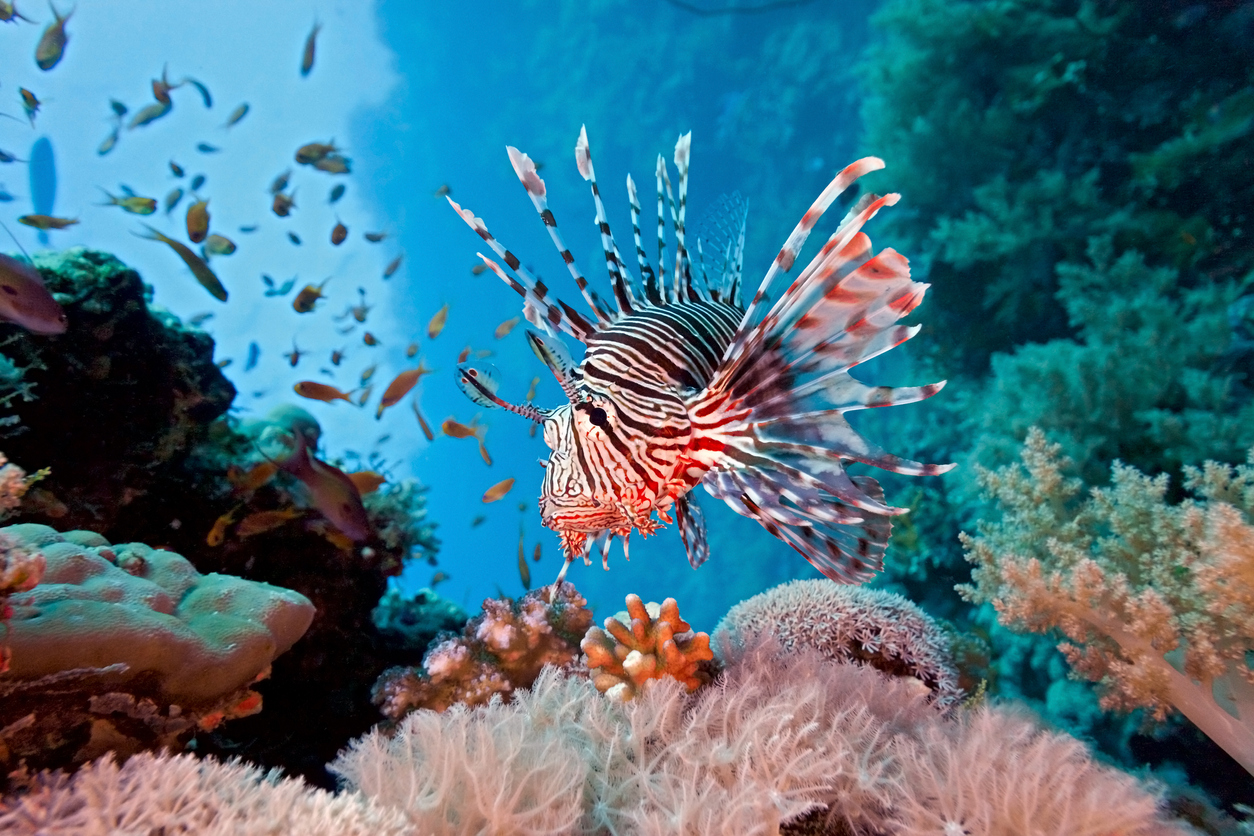 The Lethal Nature of Lionfish: What Makes These Fish So Dangerous in the Wild?

From its foot-long, venom-filled spines to its striped colouring, the lionfish is a species like no other. Every inch of this incredible creature seems to say ‘don’t touch’, and you’d do well to heed the warning.

But while the lionfish is certainly a danger to those daft enough to get too close, it’s to other fish that it poses the greatest threat. Because like several animals in our seas, lionfish are invasive, and are causing a lot of problems for the native species in regions where they’ve been introduced.

To help you get to grips with the incredible lionfish, we’re taking a look at what they are, where they’re found, and why they’ve sadly become such a big problem in several seas around the world.

The Lionfish: Key Stats and Facts

Beautiful yet deadly, the lionfish is one of the most recognisable creatures of the depths. Learn all about this striking species in our fact file below.

What is a Lionfish?

The lionfish is a type of venomous fish which belongs to the Scorpaenidae family – which literally means ‘scorpionfish’ on account of the venomous mucus found in their sharp spines. There are 12 known species, with the most prevalent being the Red lionfish.

Characterised by their unique appearance, lionfish are easily spotted amid the rocks and reefs where they’re most commonly found. Their most defining features are the 18 long, venomous spines which protrude around their bodies – positioned on the back, underbelly and dorsal to provide all-round protection from predators.

As well as their huge, intimidating spines, lionfish feature a vibrant red and white striped colouring, which is also intended as a defence against predators. This amazing colouring, coupled with the fish’s striking spines, have made it a popular aquarium fish, and one of the most popular exhibition species of the Scorpaenidae family.

Lionfish prey on small fish, crustaceans and molluscs, using their long spines and bilateral swim bladder muscles to expertly corner and pick off their victims. Biologists also believe that lionfish are able to spray jets of water at their prey to disorient them right before they strike – a tactic which makes them a truly formidable hunter.

The lionfish has few predators in the wild, thanks in part to the effectiveness of their venomous spines. This is particularly true among the Atlantic population, where lionfish are virtually free from predation.

Of the known species to feed on lionfish in their native Indo-Pacific habitat, predators include moray eels, tiger groupers, and blue-spotted cornetfish. Sharks are also known to prey on lionfish, and it’s believed they’re immune to their venom.

Where Are Lionfish Found?

Lionfish are native to the Indo-Pacific, where they live in relatively shallow waters among reefs, coral and lagoons. Some species are also found in other subtropical and tropical seas, from southern Korea and parts of Australia, to Sri Lanka and Sumatra in the Indian Ocean, as well as the Red Sea.

In recent years, there’s been a huge increase in the number of lionfish found outside their native habitat, chiefly in the southeast coast of the USA, the Gulf of Mexico and the Caribbean. It’s believed they were introduced to these areas by irresponsible aquarium owners, and have since spawned uncontrollably, with very few natural predators to control their numbers.

Are Lionfish Dangerous to Humans?

Lionfish can be dangerous to humans due to their potent venom, but incidents of people being stung are infrequent and rarely fatal. A lionfish sting is, however, likely to have some fairly unpleasant effects, from extreme pain and nausea, to convulsions, dizziness, fever and numbness. Yikes!

Because lionfish are predatory marine animals, there have been reports of aggression towards divers and fishermen. Such behaviour is, however, likely to be purely defensive, with the fish using their lethal spines to fend off those it deems a threat. Needless to say, if you were to spot one on your travels, we’d suggest keeping well clear!

What Problems do Lionfish Pose in the Wild?

Sadly, lionfish are a big cause for concern in regions where they’ve been introduced by irresponsible aquarists. Indeed, biologists have named them one of the most aggressively invasive species on the planet, due to the amount of harm they’re doing to the precious reef ecosystems of the Atlantic and the Mediterranean.

Lionfish prey on reef fish, crustaceans and molluscs, as well as species, like the scamp grouper, which are important commercial fish in the US. And because they have no natural predators in these waters, their numbers are soaring at an uncontrolled rate – with the potential to cause serious harm to native ecosystems in the years ahead.

Due to the threat invasive lionfish pose to natural ecosystems and local fishing economies, drastic action is being taken to bring their numbers down. For example, in the Florida Keys, several volunteer diving groups have made it their mission to reduce the region’s lionfish population as a means of safeguarding native reef species. Elsewhere, several campaigns have been launched encouraging people to eat lionfish, with the end goal being to bring their numbers down to a sustainable level.

It’s sad that the lionfish has earned such a bad reputation through no fault of its own. The crises facing the Florida Keys and other areas where invasive lionfish pose a threat is a reminder of the need for responsible aquaria practices, and an appreciation of the potential impact of introducing such species to a non-native environment.

At Tynemouth Aquarium, we’re proud of our work in helping to showcase the beauty of amazing marine life from around the world. If you’re keen to witness colourful and interesting fish species, why not join us for a fun and educational visit? Click here to find out more.