Trio of Seals Released back into the wild

This week three grey seal pups have been released back into the wild from the rescue centre at Blue Reef Aquarium in Tynemouth.

The three seals have spent the winter recovering from injuries in the purpose built rescue centre in Tynemouth. They all came in from beaches around the North East after calls from concerned members of the public.

The seals were all named after

famous musicians, Johnny (Rotten), Kylie (Minogue) and Ringo (Starr) all recovered well from their injuries and were fit enough to be released back into the sea.

The staff and volunteers who look after the seals were particularly happy to be able to release Ringo. He came in with some nasty injuries to his neck, which was caused by him getting entangled in some fishing gear.

Mark Sand from Blue Reef Aquarium said “It is always great to see the rescue seals released back into the wild, as the team work so hard to get them back to full health.”

With Ringo it was great to see him go, as he had some really deep cuts when he first came to us.”

“We have had a very busy winter at our rescue centre, so it is great to see the seals back in the wild.

Ringo’s injuries are a stark warning about the dangers of human waste entering the sea.

The hard work is not over yet as the aquarium are still looking after some seals which aren’t quite ready to be released back into the wild.

Visitors are able to check on their progress and learn more about the seals by visiting the aquarium.

The seals are cared for in the Marine Rescue centre by staff at Blue Reef aquarium and volunteers from British Divers Marine Life Rescue (BDMLR). 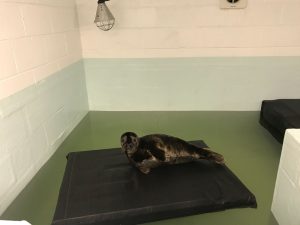 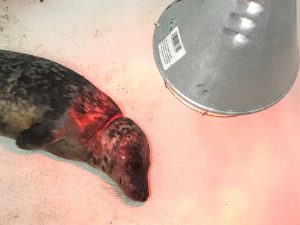 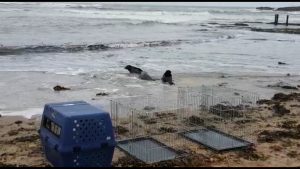