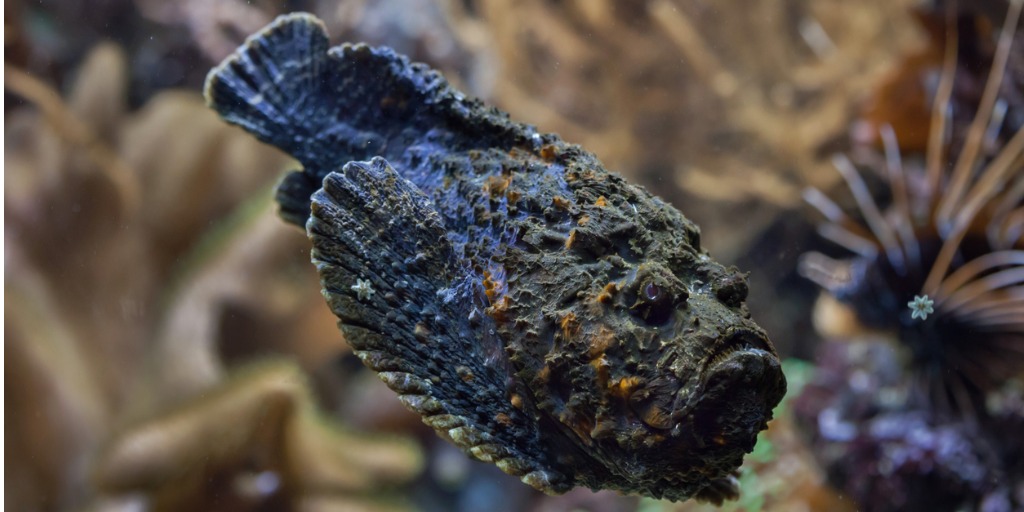 Introducing the stonefish – one of the deadliest fish in our oceans. With its potent venom, crusty skin and razor-sharp spines, this is one formidable creature, capable of killing a human in a matter of hours when a sting is left unchecked.

At Tynemouth Aquarium, we know how much our visitors love learning about dangerous species, and the stonefish is right up there among the most lethal residents of the deep. Here, we’ll be exploring what makes this fish so formidable, and where you’re likely to encounter them in the world’s oceans.

They sure are! Of the estimated 1,200 venomous fish species on Earth, the stonefish is the most lethal – with enough toxin to kill an adult human in under an hour. Thankfully, effective anti-venoms are available, though these need to administer quickly to prevent severe symptoms like tissue necrosis, paralysis and heart failure.

Despite what you might think, stonefish don’t use their venom to kill their prey. Instead, it’s there for defence against predators. The sting of a stonefish is incredibly painful, so even in the case of some of the fish’s biggest predators – like tiger sharks – it’s usually enough to deter or fend off attacks.

This potent venom, coupled with extraordinary camouflage abilities, make the stonefish a rare meal for animals that would otherwise prey on them. Stonefish venom is delivered through a row of spikes along their back, so when they’re hunkered on the seabed, they’re well protected from above.

Because stonefish are ambush predators who feed from the seabed, most stings in humans happen as a result of standing on one – something so painful, it makes our eyes water just thinking about.

Where Are Stonefish Found?

Stonefish are native to tropical waters, from the Indian Ocean to the Pacific. They’re also found in the Red Sea, and are common among the colourful flora of Australia’s iconic Great Barrier Reef.

Given they’re ambush predators, stonefish stay close to coral and rocky reefs, often camouflaging themselves against the seafloor. Their craggy, scaly skin blends seamlessly with an array of rocks, coral and sand, to the point where it can be difficult to see them at all.

Stonefish prey on reef fishes, small invertebrates and other marine animals which also make their home among the reefs. They’re adept ambush predators, relying on their camouflage to lie in wait for their prey, before striking with their huge, powerful jaws, and swallowing their catch whole.

How Big is a Stonefish?

Stonefish measure around 14-20 inches in length and, quite often, the same across thanks to their wide, rounded pectoral fins. Appearance-wise, they’re easily one of the most striking bottom-dwellers in our oceans, with algae-encrusted, grey-green skin that’s orange and yellow in patches – perfect for camouflaging against the colourful reef systems of the tropics.

How Do Stonefish Catch Their Prey?

Stonefish are bottom-dwelling ambush predators that rely on camouflage and patience to catch their prey. Thanks to their relatively flat, wide shape, they’re able to squat close to the sea or reef bed, where they use their incredible camouflage to wait, undetected, for their unsuspecting prey to wander past.

When stonefish identify their prey, there’s little in the way of pursuit. Instead, they remain as still as a stone until their catch is within biting distance – often a mere body-length away from where they’re hiding in wait. Sometimes, stonefish may stay in one place for hours at a time, which further enhances their camouflage and makes it less likely that they’ll fall victim to a passing predator.

At the moment of strike, stonefish are surprisingly quick and agile. They spring from their hidey-hole, catching their prey in their huge, gaping mouths. Most often, they swallow fish and small crustaceans whole, before returning to the seafloor to wait for their next victim.

Which Animals Prey on Stonefish?

Few animals actively seek out stonefish as their primary source of food, but several opportunistic hunters will tackle these ferocious fish if they’re desperate and in need of a meal. Remember, a stonefish is covered in lethal barbs which can easily paralyse or kill animals like small sharks and rays, or else cause severe pain, so predators do run something of a gauntlet when attempting to feed on them.

Sharks and rays aren’t the only marine animals which, given the chance, would prey on stonefish. Some species of larger sea snakes have also been known to eat them, using their own venomous bite to tackle and take down these lethal fish.

How to Avoid Stonefish and Treat Stings

Stonefish are native to tropical waters, so you’ve no need to worry about getting stung by one in UK waters. However, if you’re swimming and scuba diving in tropical waters overseas, they’re a species to be aware of – particularly around coral and rocky reef systems.

Remember, stonefish are adept camouflage predators, so it’s highly unlikely that you’ll spot one. This can make avoiding them difficult, but because they tend to stick to the seabed, there’s very little risk of being stung – provided you don’t go rummaging around in areas where you perhaps shouldn’t.

In the rare case that you are stung by a stonefish, seek medical attention straight away. The earlier anti-venom is administered, the less impact the fish’s potent toxins will have within the body. Symptoms of a stonefish sting include severe pain, swelling and redness around the area of the sting; always get medical help if you experience any of these symptoms in the water.

Fascinated by the lethal stonefish? At Tynemouth Aquarium, we’re proud to display this infamous species within our exhibit, so you can get up close to one of the world’s deadliest marine animals. For more information and to book your tickets, visit the homepage or call us on 0191 258 1031.