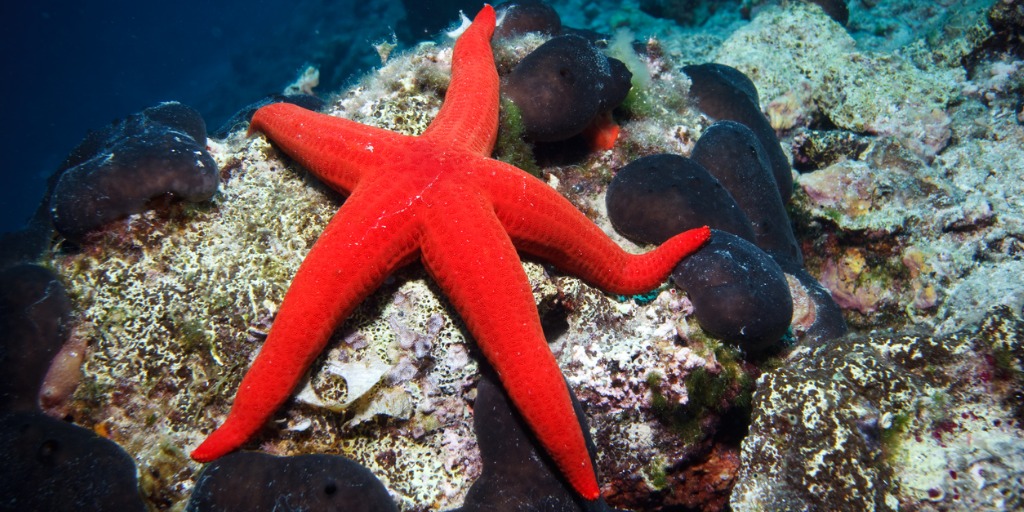 Everything You Need to Know About Starfish

Found throughout the world’s oceans in a variety of shapes, sizes and colours, there are over 2,000 species of starfish that call water their home. One of the most vibrant, fascinating creatures of its kind, there’s a lot more to starfish than just their unique look. There are all sorts of incredible facts and information about the starfish you might not know about.

Here, we’ll take a closer look at the starfish in more detail!

Despite their name, starfish aren’t actually fish! For a start, they don’t have gills, scales or fins like fish do, and they don’t have a backbone, which means they belong to a group of species called invertebrates, along with urchins and sponges.

And, because they’re not classified as fish, scientists prefer to call them ‘sea stars’, but we think it might be a while before the new name catches on.

They have no brain or blood

It seems strange to think that starfish can even survive without a brain or any blood, but if nothing else, starfish are a species with their own way of doing things. Instead of blood, seawater is pumped through their body as a replacement, with the water providing key nutrients to starfish which allows its organs to function properly. And since there’s no shortage of water around them, they’ll never run out of it!

Starfish can regenerate their arms

Amazingly, the starfish has the ability to regenerate its own arms! If they’re attacked by a predator, they may end up losing limbs, but the sneaky starfish can also amputate one of its arms in order to hide and escape, throwing other animals off their trail.

But because its arms can take months or even years to regenerate, it has to be a serious situation in order to lose one. And, even more incredibly, if the severed appendage is not harmed, then it can heal itself and regenerate because most of its vital organs are kept in the arms. When fully regenerated, this creates a genetically identical starfish!

They don’t always have five arms

Though we usually picture starfish as having five arms, this isn’t always the case. Some species, such as the sun star, can have up to 40 arms!

They have eyes on the ends of their arms

While starfish may lack blood, a brain and even a central nervous system, they still need eyes to be able to navigate their watery surroundings. And because starfish are such unusual creatures, where else would their eyes be located but on the ends of their arms?

Although their eyes can’t see things in the same ways that ours can; the eyes, which look like small red dots, are able to detect different shades of light, allowing them to navigate through the ocean. This lets them hunt for food and avoid becoming a meal themselves.

Starfish eat with their stomachs inside out

Starfish love to eat things like mussels, clams, snails and barnacles, which all have armour-like shells to protect themselves. Prying open these shells can be quite tough, but starfish have their own way to eat these creatures when it’s time for a snack.

A starfish’s mouth is on its underside, so when it catches food, it wraps its arms around the animal’s shell and pulls it open slightly. Then it does something highly unusual: the starfish pushes its stomach out through its mouth and into the open shell. The animal is then digested and the starfish’s stomach slides back into its body.

This means if it’s especially hungry, it can eat prey that is much larger than would be able to fit into its very small mouth.

They move using hundreds of feet

At the end of each of its arms, the starfish has hundreds of little feet. In order to move, they fill these feet with water which causes the arm to move like a foot would. And they can move a lot quicker than you might expect!

They aren’t all star-shaped

While many starfish are shaped like stars, there are a few varieties that aren’t. The Cushion starfish, for instance, actually has a round blob-like shape, but still has the same genetic qualities that make it a starfish. They don’t hunt like other starfish either, preferring to feed on plants and plankton from the ocean floor.

Their skin is very strong

The skin of starfish is made from calcium carbonate, which gives its exterior a tough, leathery feel that makes it difficult for hunters to eat. In fact, certain species of starfish go a step further to protect themselves thanks to numerous spines on their skin, which act as a layer of armour to put off predators. The crown-of-thorns starfish is one especially prickly customer you wouldn’t want to come into contact with!

Their vivid colours can also act like camouflage amongst coral and plants, or even scare off potential predators too!

Starfish aren’t very social creatures, preferring to spend most of their time on their own. However, they do sometimes join up during certain times of the year to feed – like an underwater dinner party!

Looking to see starfish for yourself? At Tynemouth Aquarium, we’re open to the public 7 days a week, from 10am to 5pm with last entry at 4pm. Tickets can be purchased online in advance at a discounted rate here or simply purchased on arrival.