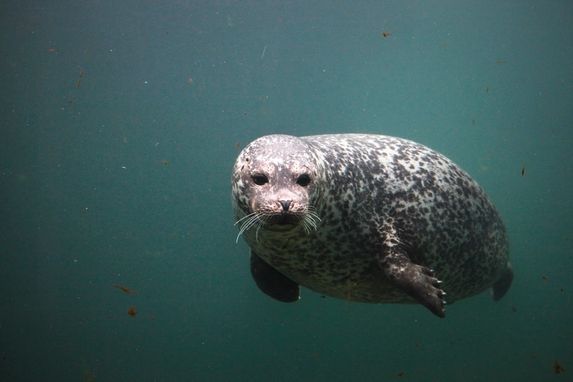 Seals – cute, cuddly and remarkably clever. These majestic marine mammals are found throughout our oceans, and despite their loveable demeanour, they’re actually one of the most unique, perfectly-adapted predators in our seas.

Seals hold a special place in the hearts of British nature lovers. That’s because they’re one of a small handful of marine mammals which are regularly spotted on our shores. If you’d like to learn more about these amazing creatures, including how to spot them in the wild, our comprehensive seal guide can help fill you in.

What Are the Different Types of Seals?

Seals belong to a group of mammals called ‘pinnipeds’, which refers to them being flipper-footed. They come in all sorts of shapes and sizes, from cute common seals found right here in the UK, to monstrous elephant seals that inhabit distant isles like Macquarie and South Georgia.

There are three main types of seals within the pinniped group, Phocidae, Otariidae and Odobenidae. The main difference between them is that some species have ears and others don’t; that’s why they’re more commonly broken down into two categories:

Where Are Seals Commonly Found?

Seals are found in all the world’s oceans, from the Atlantic to the Pacific, and everywhere in between. However, they’re much more common in colder seas, so you’re more likely to get a broader mix of species and animals the closer you get to the Arctic and Southern oceans.

Here in the UK, there are two types of resident seals that are native to our shores: harbour or common seals and grey seals. Both of these species are classified as Phocidae seals, so they’re true seals with no outer ears.

That’s not to say other species of seals don’t pay us a visit on occasion. Several non-native species have been sighted around the British Isles in the past, particularly in northern regions where the water is slightly colder.

What Do Seals Eat?

In the water, seals are supreme hunters. They’ve evolved to swim at pace, chasing fish and catching them in their sharp teeth. Depending on the size of their prey, seals will eat their food whole or else grasp it in their front flippers, to enjoy in bite-sized chunks.

When hunting, seals rely on their highly-sensitive whiskers to identify movement and monitor their surroundings. Even in murky water when visibility is low, seals can detect nearby prey using their finely tuned senses, before using their powerful flippers to propel them towards their lunch.

How Do Seals Breathe and Dive?

To look at, seals appear a little ungainly – particularly on dry land. But get them in the water, and these beautiful mammals are as graceful as any, gliding through the surf at astonishing speeds.

But how exactly do seals swim and dive so well? And what’s the secret to their supreme swimming capabilities?

Unlike other mammals, seals are voluntary breathers. What does that mean? It means they breathe when they choose to breathe, not unconsciously like us humans. This gives them the ability to dive and swim underwater for long periods.

When a seal dives, it breathes out, rather than in – the exact opposite of us. There are a couple of reasons for this, the first being to make them less buoyant in the water. Expelling air also prevents bubbles of nitrogen forming in the body, which is the very thing that causes ‘the bends’ in human divers.

But how do seals survive without oxygen? This is where things get very clever. Seals have a high concentration of oxygen-storing pigments in their blood and muscles, so they can store oxygen for longer than most other mammals. Not only that, but their heart rate also reduces by over 50% when they’re in the water – meaning less oxygen is needed for the heart and brain.

Seals have evolved to be such amazing divers that they’re capable of staying below the surface for up to 30 minutes at a time, and at impressive depths. Indeed, the northern elephant seal is known to dive to depths of over 1,000 metres – which is deeper than many species of whales.

How Can You Identify Seals Around the UK?

Here in the UK, there are two seal species you’re likely to see along our coast, harbour seals and grey seals. Here, we’ll tell you how to identify them from one another, so you can impress your friends and family the next time you’re lucky enough to spot a seal colony.

Harbour seals, or common seals, are the second-most prevalent seal species in the UK, with an estimated 33,400 animals around the British Isles. Here are a few facts about them:

Grey seals are the most common seal species in the UK, with an estimated 120,000 animals in British waters – representing 40% of the global population. They’re also the biggest, which should make them much easier to spot than their cousins, the harbour seal.

For the past 10 years, Tynemouth Aquarium has been part of a collaborative effort to rehabilitate seals, working alongside British Divers Marine Life Rescue (BDMLR) and the RSPCA to provide emergency care for seals in need. Through this joint effort, we launched a dedicated rescue centre, the Seal Hospital, as a purpose-built facility for providing care and treatment for seals found injured on the Tyne and Wear coast.

With space for up to six seal pups, our rescue centre has become a vital place for safeguarding and housing vulnerable marine life, before they can be safely released back into the wild. If you’d like to learn more about the Seal Hospital, including ways to get in touch, click here.Seals are just one of the incredible animals you’ll encounter at the Tynemouth Aquarium. For more information and to plan your visit, head to the homepage.